Immerse yourself completely in this unique world. The world’s largest island is strikingly beautiful, a land of massive ice formations, deep-blue fjords and lush pastures. Greenland is also blessed with unique flora and fauna, the midnight sun and northern lights, and the distinctive Inuit culture. 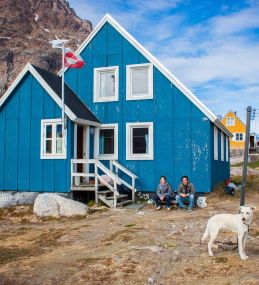 Greenland - The Land of Contrasts

Let yourself get carried away by the openness and warmth of the Greenlanders, who trace their ancestors to the island’s ancient Inuit inhabitants and intrepid Scandinavians who first arrived on the island more than a thousand years ago. Their colorful houses are like splashes of color scattered along the shore and stand in striking contrast to the rocky landscape and the massive inland icecap which is omnipresent in Greenland.

A visit to one of the island’s small towns is like a trip back in time to a place where life runs at a much different pace. The short Artic summer is intense. Flowers, herbs and mosses explode into a sea of color in Greenland’s coastal valleys and mountains, taking advantage of the warmth and giving new character to the scenery for a couple of weeks. Meanwhile, dog sleds and snowmobiles are casually parked in front of the houses and barns waiting for the onset of another long winter.

Greenland provides an ideal habitat for a variety of wildlife. Whales majestically rising from the sea, musk oxen grazing on grassy shores and of course the king of the Arctic, the polar bear, are just a few of Greenland's iconic animals.

The polar bear (in Inuit: Nanoq) has traditionally always been adored by the Inuit. They believed that the soul of a dead hunter lived on in a polar bear. The predator is a symbol of strength and can also be seen on the Greenland coat of arms.

Greenland is the largest island in the world and yet it has the lowest population density worldwide. 80% of the island is covered by ice, so it is sometimes hard to believe that you can still live on it. The climate on the island is arctic, even in summer temperatures in the North often don't rise above 10 degrees, so be prepared for cold weather even when the sun is shining. However, depending on the region, temperatures can also vary greatly, so in the South they may rise up to 20 degrees in summer.

The main economic factors in the country are tourism, fishing, agriculture and mining. The national languages are Greenlandic and Danish, but English is also spoken by some people. 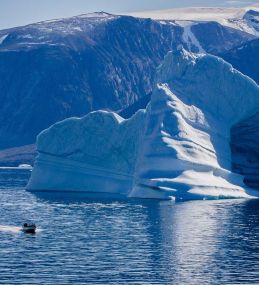 We'll Take You on an Unforgettable Journey

During the winter months, despite the sometimes icy temperatures, you can observe one of the most beautiful natural phenomena in the world: Northern Lights. The natural spectacle can be observed all over Greenland at this time. For the Inuit (in English: humans) who live in Greenland, the Northern Lights have a very personal meaning. For some, the lights, according to a legend, mean that the souls of beloved decedents play soccer in the sky.

The term Inuit, by the way, should not be equated with the term Eskimo, which often doesn’t exist in the vocabulary of the Inuit, and is frequently perceived as derogatory.

Our cruises take you from the lush landscapes of South Greenland and to the vast, ice-filled fjord systems of West Greenland. In South Greenland you have the opportunity to visit Viking ruins. The first Scandinavian settlement was established here under Erik "the Red" Thorvaldsson, who the first to give the country the name Greenland, because it was so green and fertile.

In the west of Greenland, Disko Bay is an absolutely impressive and special destination. The name of the bay has its origin in Greek (discos: plate, disc), and thus also fits because of its round shape. Ilulissat (in English: icebergs), is the most important city of Disko Bay. It is the third largest city of the country and a center of attraction for visitors, because you have a great view on icebergs from here. You can, for example, go on a city tour or a hike to the icebergs, as well as a boat tour through the Ilulissat Icefjord. A scenic flight over the icefjord is also possible. The fjord was declared UNESCO World Heritage in 2004. The glacier has gained in importance in recent decades, especially for research, which is also due to climate change. You can find more ideas for shore excursions here.

You decide which region you want to explore!