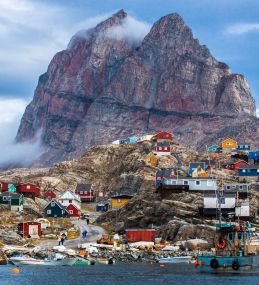 In Greenlandic Uummannaq means "heart-shaped" - a fitting description for the famous 1175 meter high mountain of the only 2 square kilometer wide island, after which it was named. Most visitors to the charming city, of course, think of the symbolic significance of a human heart when they see the mountain, but the inhabitants of the island rather see it as a seal heart.

Uummannaq is known not only for its mountain, but also for the fact that for many years the World Ice Golf Championship was held here. In addition, in 1972, eight mummies of the ancient Inuit culture, which are about 500 years old, were discovered near the city and can be admired today in the National Museum of Nuuk.

From November to February the sun is not really visible in Uummannaq, due to the polar night, but on the other hand, from May to June the midnight sun does not set. Uummannaq is a place for whaling and seal hunting, but today tourism became an important economical factor, too. A visit to the local church, museum or famous orphanage, founded in 1929, should definitely be on your list as well. 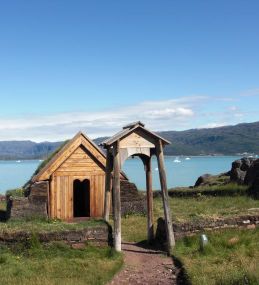 Living up to its name, southern Greenland is fertile and lush. During the summer, visitors encounter blankets of wildflowers which form a vibrant contrast to the icebergs floating in the nearby fjords and the massive inland ice cap. Over 1,000 years ago, Erik the Red decided to settle here, after he was banished from Iceland and Norway due to murder, and gave the unknown country its name. Today, many ruins recall the history of those early Norse settlers.

While visiting the ruins, you can walk along the same paths that Erik the Red, who owed his name to his hair and beard, discovered with his settlers 1000 years ago. He named the settlement Brattahlíð (in English: steep slope).

You can learn more about the Viking way of life, when you visit the Viking site Qassiarsuk. From Narsarsuaq you can take a Zodiac boat to the site. Today, Qassiarsuk is a sheep-breeding settlement founded in 1924 by Otto Frederiksen. At the destination you will see Greenland's first Christian church, built by Erik the Red and his wife. The area is also ideal for hiking, e.g. in the neighboring valleys.

Narsarsuaq means "the great Plain" and is the gateway to South Greenland and a highlight for nature lovers, as they have the opportunity to visit fjords, icebergs and the typical Greenland ice sheet, for example on a hike, boat tour or even on a helicopter tour. The settlement was founded in 1941 as a US military base called "Blue West One", during World War II. Today, about 160 people live here, including Greenland's only beekeeper, who sells small jars of honey in a shop.

Narsarsuaq is an ideal starting point for day trips. From here you can take a boat trip to the Qoroq icefjord, drifting between the light blue giants of ice that South Greenland is famous for. The engine is stopped and the boat is drifting silently by the current. Only the cracking of the ice can be heard every now and then.

If you prefer to stay on shore, you can also go on a hike to the Tasiusaq settlement, which runs through the Arctic landscape. Alternatively, you can add a kayak ride to the hike and experience both glaciers and icebergs from a whole new perspective. 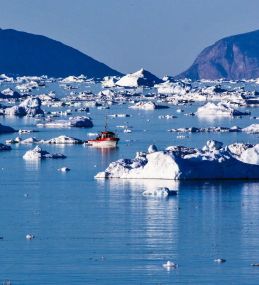 Disko Bay combines incredible iceberg scenery and Inuit hospitality. Along the eastern edge of the bay is Ilulissat, the third largest town in Greenland. The name means “iceberg” in Greenlandic, a reference to its location at the mouth of the iceberg-filled Ilulissat Icefjord, a UNESCO World Heritage Site since 2004. Ilulissat is the most important city of Disko Bay and a center of attraction for visitors, because you have a great view on the icebergs from here.

In front of Disko Bay is Disko Island with the community of Qeqertarsuaq. It is the only settlement on Disko Island. If you are interested in music, you can experience real Greenlandic singing and culture here, with a visit to the famous church Qeqertarsuaqs, built in 1914. Due to its octagonal floor plan it is popularly called the "Inkwell of God".

Few places in Greenland are as breathtaking as Eqi Glacier, 50 miles (80 km) north of Ilulissat. The glacier is one of the most active ones and calves regularly, i.e. larger and smaller pieces of ice break off at regular intervals and fall into the water. This often creates a distinctive crash. 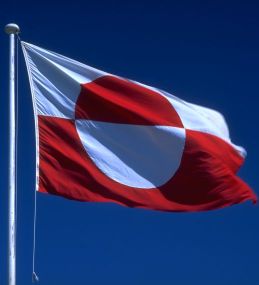 Greenland’s capital has around 16,000 inhabitants and combines Inuit traditions with modern European urbanity. It’s also Greenland’s oldest town, founded in 1728 by the Danish Norwegian missionary Hans Egede. The National Museum features 500-year-old mummies from Qilakitsoq, as well as other artifacts related to Greenland archaeology, history and art. The Katuaq Cultural Center in downtown Nuuk is the venue for concerts, exhibitions, cinema and local cuisine. The University of Greenland, the country’s only university, is also located in Nuuk.

The Café Mik offers a particularly beautiful view to its guests. The name of the café derives from the Greenlandic term Kaffemik, which literally means "via coffee" and is usually an invitation to a coffee party. Greenlanders often invite family and friends to Kaffemik at festive occasions.

In case you like to try something more savory, you should visit the fish market Kalaaliaraq (in English: small Greenlander), in Nuuk. Here you will find freshly caught fish.

A very popular photo motif is the "Mother of the Sea", a granite sculpture by the artist Aka Høegh, on the coast of Nuuk (Inuit for "promontory"). It is a scene from the most popular Greenlandic saga. Sedna, the most famous name of the Inuit’s sea goddess, means "the one down there in the sea". In short, the story is about Sedna, who used to be a vain but beautiful girl that was sacrificed by her father, who let her drown in the ocean. According to the legend, she was so mad about her death that she decided to rule over which sea animals were allowed to be caught and eaten by humans. The saga ends with Sedna not liking the Inuit's misdeeds and punishing them by keeping all the animals captive at the bottom of the ocean with her beautiful hair. From then on shamans had to dive to her to comb her hair and calm her down. Only then did Sedna allow them to hunt for sea animals. Therefore, the hunters always gave thanks to Sedna, when they caught something. Even today, the Greenlanders mostly live off sea animals. By the way, the statue has become a popular meeting place for couples in love.

In addition to a city tour including a visit to the National Museum, you could also go on a hike to Mount Lille Malene (Quassussuaq) - a real hiking adventure through the wonderful nature of Greenland.

There is also the possibility to go on a fjord safari, where you have good chances to see whales. The boat trip will take you to Sermitsiaq Island, which includes another of Nuuk's attractions - Sermitsiaq Mountain.